Reading, county town of Berkshire and 35 miles west of London, was at that time famed for its four ‘B’s – Huntley & Palmers’ biscuits; Sutton’s bulbs and seeds; H. & G. Simonds’ beer; and Huntley, Boorne & Stevens’ boxes and tins in which Huntley & Palmers sold their biscuits.  It had other industries besides, Pulsometer pumps being one, but none of these now remain and Reading is more dependent today in being a commercial and retail centre, although it does still have a number of small manufacturing industries. 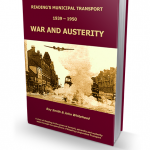 This 240-page prolifically-illustrated case-bound book is an account of what life was actually like in this provincial town, on a day-to-day basis, during the six years of the Second World War and in the five years of austerity which followed.  It recounts not only much of daily life but with it a great many half-forgotten minor events that took place, the detail of which present-day social historians could quite possibly miss. All of it is background to the detailed recording of the town’s municipal transport history during that time.

Public transport is an important and integral part of the social history of any town.  In Reading, the authors (and others, like-minded, who have now, sadly, departed this life), who had a passion for this sort of thing, were extremely fortunate over much of the past half-century, to have been able to collect together copious quantities of prime source information when it was offered, which would otherwise have been lost for ever.  This, together with personally-kept records, is the flesh of the present offering, all much enhanced following hours of scrutiny of local newspapers in Reading Reference Library.  The skeleton on which the latter has been hung, comprises Council Committee Minutes, Acts of Parliament, and Ministry of Transport documentation.

With the whole composition moulded into readable and chronological form and exhaustively checked for historic accuracy, the icing on the cake has to be use of contemporary illustrations.   Local papers were unable to illustrate very much during the war for security reasons, and there is very little of great interest to be found of literally anything – apart from, that is, subjects like weddings or groups of Air Raid Precautions personnel, for example.  Public transport, in any case, has rarely been a subject which featured in the local papers, even in peacetime.  Photography on roll film by private individuals, eight exposures to the film, remember – then give the exposed film to the local chemist to develop and print relatively expensively – was a hobby in which the ordinary individual was rarely likely to consider local public transport a suitable subject!  During the war, photographic film became more-or-less unobtainable – and, in any case, there was the serious question of home security.  Who would want to be seen taking photographs in the street at that time, for they would be sure to attract attention – from a fairly alert public, the Home Guard, or a policeman, perhaps – and very likely would have their camera confiscated and the precious film destroyed!

One gentleman, a transport enthusiast from south-east London, and originally a keen tram photographer, seems to have had a source of roll film, the necessary developing chemicals and a dark-room, and visited many  provincial towns, including Reading, on several occasions during the war and subsequently, and took photographs.  One can imagine him carrying a folded raincoat over his left arm to hide his camera……!  Fortunately, this gentleman was never apprehended, his negatives have survived, and many which feature local subjects are now owned by one of the authors of this book.  We have thus been able to make virtually full use of them to help illustrate our book.  Other photographs, generally those taken pre-war and post-war, have been drawn from a number of sources as a result of some meticulous research over a great many years.

We are confident that this book will be seen to be serving an important purpose in recording some of Reading’s social history.  We hope that it will be enjoyed for many years to come.